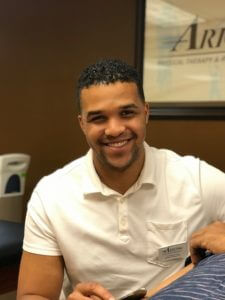 Reason for getting into Physical Therapy:

In high school, I injured my MCL playing football. I was devastated as it was my senior year of high school football. I began going to physical therapy in hopes of salvaging my season. While receiving therapy, I began to develop an appreciation for physical therapy and the bond I had with my therapist. In five short weeks, I was back on the football field to finish my senior campaign. Without the help of my amazing physical therapist, I would not have been able to return to the football field and perform at such a high level. Years later when it came time to make a career choice, I reflected on the time I had at physical therapy and envisioned myself helping others the same way I was helped as a teenager.

During my time at inpatient rehab at Staten Island University Hospital, I encountered a patient who suffered a broken hip as the result of a slip and fall. Following the injury, the gentleman’s main goal was to become healthy enough to walk to his back porch to sit and watch his grandchildren. As the days and weeks went on I watched his confidence and overall demeanor change. Every time he walked further his smile became wider. After being discharged he sent a letter of gratitude stating how happy he was to be able to walk again and spend time with his grandchildren.

Interesting hobbies outside of work: